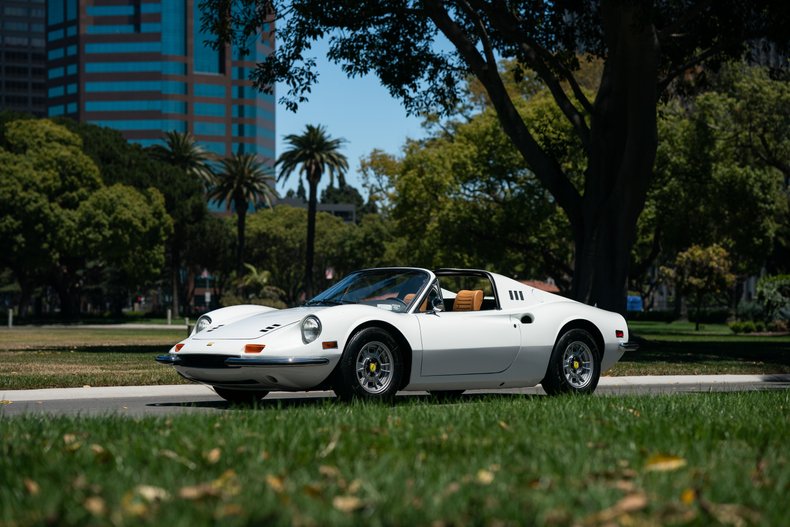 
During the 1950s legendary US Porsche importer Max Hoffman successfully convinced Ferry Porsche that what the market really wanted was an open top sports car. The resulting Porsche Speedster was an instant commercial hit when it was introduced in 1954. In 1957 Hoffman would follow one dramatic success for another with the introduction of the Mercedes-Benz 300 SL Roadster. Both the Speedster and 300 SL Roadster owe much of their existence to Hoffman persuading both marques for open top versions of the famous coupes.


The same cannot be said about Enzo Ferrari who reacted relatively late to market trends and subsequent demand for open top convertibles. Throughout history, Ferrari only produced convertibles in very limited quantities, all of which were available by special order only. The Dino would change that.


The Dino marque was created in 1968 as a lower priced, more affordable sports car capable of taking on the Porsche 911. June 1971 marked the introduction of the third and final stage of production, labeled the 'E-Series'. At first, only the closed top GT model continued production, but in February 1972 production began on the targa model appropriately labeled the GTS. Over a period of two and half years a total of 1,282 GTS “spyders” were built, demonstrating the model's commercial success.


Chassis 08496 was completed at the factory on 14 June 1974. Specified in Bianco Polo (white) over a Pelle Nera (black leather) Connolly interior, with air conditioning, power windows, instruments in miles and standard Cromodora wheels. Acquired by the current owner in 2013 this example has benefited from recent service and careful use. While the traditional Rosso Chiaro (red) represents the most common color seen on Dinos, the Bianco Polo finish is a welcome change, even if the interior has been updated to beige leather. Bianco represents one of the rarest standard color options available with only 247 examples produced. That compares to 845 in Rosso Chiaro, 445 in both Giallo Fly and Nuovo Giallo Fly (yellow), and 314 in Rosso Dino (orange). Recent service work totals in excess of $35,000 with invoices on file. September 2021 saw a major service performed at a cost of $29,000. Further invoices dated October 2021 and June 2022 saw further suspension and brake overhauls.
101 - 101 of 101 Posts
About this Discussion
100 Replies
26 Participants
Last post:
USADino 1 mo ago
Ferrari Life Forum
A forum community dedicated to Ferrari owners and enthusiasts. Come join the discussion about performance, build specs, production numbers, modifications, classifieds, reviews, troubleshooting, maintenance, and more!
Full Forum Listing
Explore Our Forums
Ferrari Discussion Modern V8s: 360, F430 Pre '99 V8s: GT4, 308, 328, 348, F355 Modern V12s: 456, 550, 575, 599, 612, 812 US: VA, MD, DC
Recommended Communities