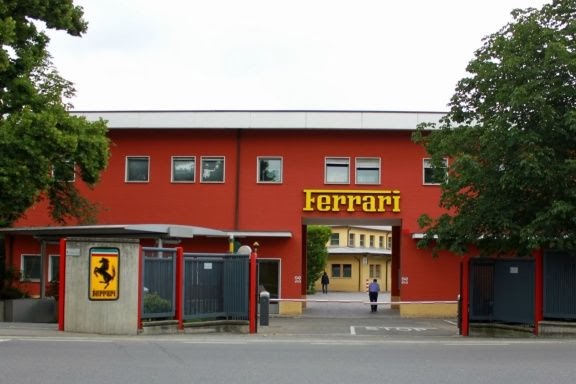 I was talking to a Ferrari friend coordinating a visit to the Ferrari factory in Maranello for another Ferrari friend and it looks as though my friend will get to enjoy his Ferrari tour but what became clear is how different things are today than they were in Enzo Ferrari's time. My visits to the factory weren't planned, choreographed, orchestrated or stage managed; I just showed up.

The first time I darkened the door of the factory in Maranello was in 1970. I had flown from Los Angeles to London where I stayed a few weeks looking for Bentleys to buy and ship back to California for resale. I scoured the landscape purchasing cars among them a pristine James Young R-type discovered in Surrey and a beautiful S1 I found (after enjoying a first class lunch aboard the train) in Southampton. It was a wonderful life and I experienced meals at Claridge's, cricket at Lord's, pub lunches in the countryside and plays in London's West End--on that trip I saw Agatha Christie's The Mousetrap and Sleuth starring Anthony Quayle at theSt Martin's Theatre. I was wined and dined by my very good friend W.J.D. Clarke and his family in their homes and ventured into some very interesting antique shops. I had been making these trips to London since I was 16 and knew where to go and what to do.
On this trip, however, I did not return home after consigning my cars to the shippers and instead took an Alitalia flight to Milano where I would attend the Italian Grand Prix at Monza (and meet Enzo Ferrari in the process) and absorb some Italian atmosphere and culture. The Grand Prix was exciting and Clay Reggazoni won in his Ferrari though the weekend was was spoiled by the death of Jochen Rindt who suffered a fatal accident during practice. Jochen became the first and only posthumous World Champion.

On the Monday after the Grand Prix, I took the express train to Bologna and then doubled back to Modena. After walking around the town and finding that the Ferrari customer service department in Modena to be closed for lunch, I found a restaurant and enjoyed a wonderful and leisurely-paced luncheon along with some pleasant conversation with the proprietor. I was especially interested in his thoughts on the famous neighbors, Ferrari and Maserati, and his appreciation of their legendary efforts in racing. I told him I was visiting the Ferrari factory after lunch and he asked if I had an appointment. Without seeing beyond his question, I told him that I did not. He called a taxi for me and I took my leave.

"Maranello," I told the taxi driver and with a smile he steered the familiar course and about twenty minutes later he was dropping me at the factory gate. Approaching a door near the archway over which the familiar Ferrari logo confirms your arrival at a place of legend, I rang a bell that was answered after several minutes by a man in a suit. "Hello. I would like to take a tour of the factory, please," I told him in Italian. He asked if I had an appointment. I felt like Monty Python's John Cleese when he would answer an awkward question with "Not as such" but confined myself to a simple "No". I added that I had come from Los Angeles and that I owned a Ferrari GTO. Though I had, in the course of the previous two days at Monza, met Enzo Ferrari and the Formula 1 team manager Franco Lini (whom I had originally encountered some months earlier at a Ferrari Owners Club meeting in Los Angeles), it did not occur to me to mention this to him. He asked me to wait.

Whatever conversation (or series of conversations) had taken place, the result was that I was beckoned to enter and was taken on a full tour of the factory by a nice gentleman whose name was Pietro de Franchi. I saw the production line that included an example of a new model that had not yet been revealed to the public (it would debut later as the 365 GTC/4), witnessed an engine undergoing a dynamometer test (what a glorious sound!), paid a visit to the foundry and--Holy of Holies--the racing department.

Did I ask to see Il Commendatore or Franco Lini? No. I'd met them two days earlier and had nothing new to say or ask of them, but I have to confess that it was impossible to walk around the factory without feeling Ferrari's presence. Whether he was observing us or I was feeling his proximity via the cars that were his life's work, I don't know. It was, however, hallowed ground and, as my friend Paolo Migliorini Brizzolari said to me, "...it was a very special day impressed in your memory."

Join Date: Aug 2007
Location: Jersey
Ferrari Life Posts: 1,130
Wonderful to read about Ferrari back in the 1960s and 1970s! Thank you for taking my imagination back to an incredible time. I get a little bit of what you describe when I drive an older Ferrari, time travel to when it was built, imagining what the world (though rose-tinted lenses) was like then.
David

Join Date: Jan 2006
Location: Chevy Chase, Md
Ferrari Life Posts: 9,567
great read. thanks kras. my visit was quite different. They wouldn't even let my son past the front door (underage).

Join Date: Dec 2003
Location: Los Angeles/Paris
Ferrari Life Posts: 504
Thanks for your kind words. It is often said that we remember things as being better than they were but I think the world of Ferrari back then was, in fact, a better place probably because it was the domain of an autocratic ruler rather than a corporation with a board of directors.

I suspect that I got in because word reached Ferrari while I was waiting in the anteroom and mention was made of my GTO, and he likely said, "Oh, him again--d'accordo."

Join Date: Aug 2011
Location: Albuquerque, NM
Ferrari Life Posts: 11,881
Stephen- Great story. Things were pretty much the same in 1983 when they were happy to see Americans when all they had to offer in the US were V8s. One on one tour with Ing Andreoni, although I did not get to see the racing department. That is him standing next to the Mondial QV.
Attached Images

Every day I look around, and if nobody is shooting at me, it is a pretty good day.
tazandjan is online now
Quote