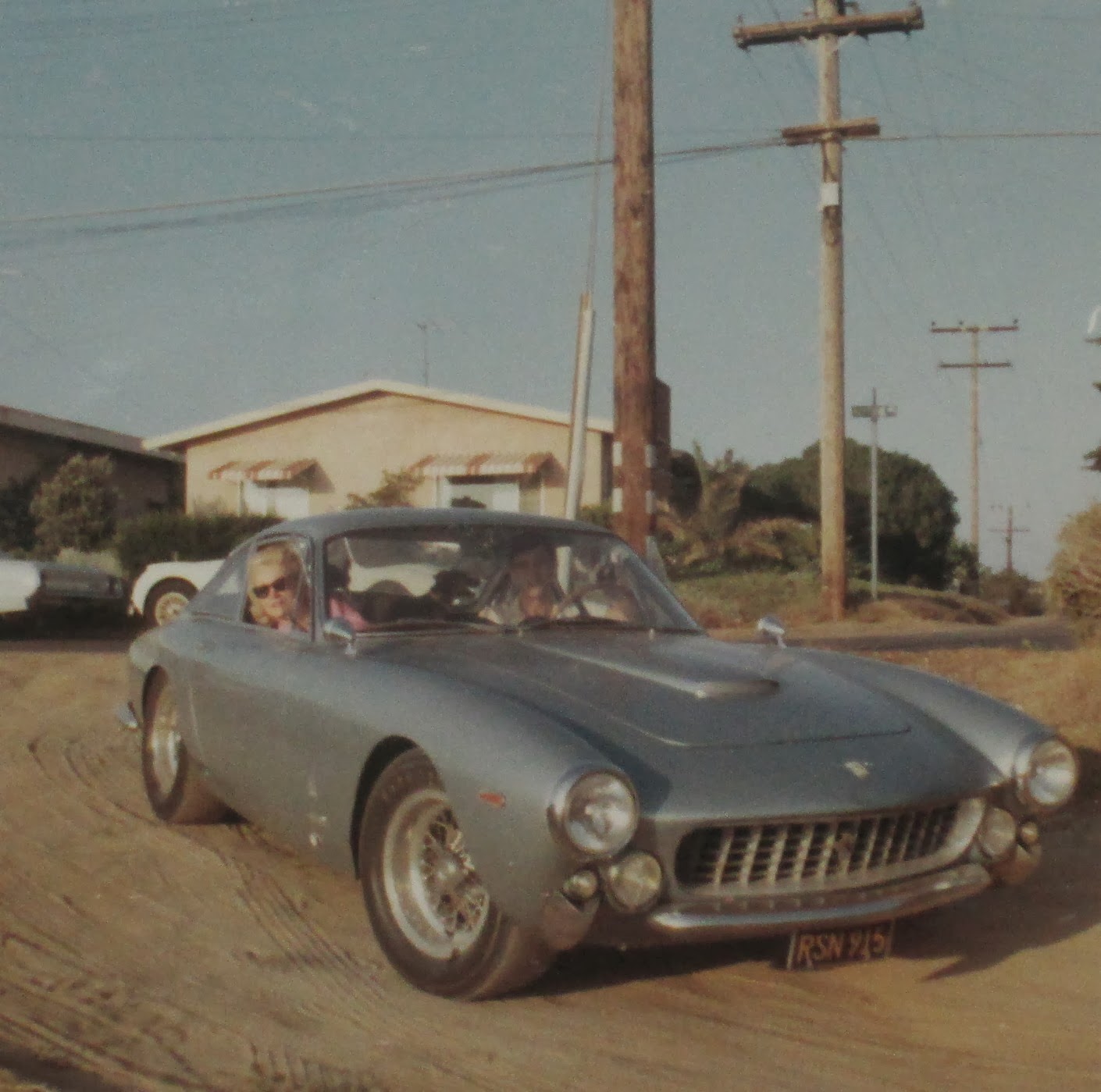 After a year or so of Jaguar E-Type ownership ('There's nothing like Jaguar motoring!" D.S. Jenkinson was fond of writing in Motor Sport magazine), I had grown weary of breaking down at the side of the road albeit in some very picturesque locations--the California desert, the Malibu coastline, along Route 66 in Arizona--not to mention my own driveway when starting off on a much anticipated trip. The Jaguar was like being married to the most beautiful and most temperamental woman in the world. I was the envy of everyone but few knew of the frustrations. If only I had a dollar for every time someone approached me as I sat in the car waiting for a tow truck to have them tell me how lucky I was to own such a beautiful car! Well, of course, they were right, and yet...

As beautiful as the Jaguar was (and still is, by any standard), I had always had a special reaction to Ferraris. Recuperating in the hospital after my head-on collision on the Ventura Freeway, I discovered Road & Track magazine and started familiarizing myself with the Italian brand and its history not to mention the legendary drivers who raced the cars from Maranello. I wanted a Ferari but I wasn't yet old enough to drive much less own one.

At Riverside Raceway, I saw the most amazing car being driven by Jill St. John. It was obviously a Ferrari and later I learned that it was a Berlinetta Lusso. It was breathtaking and I wanted one. It did not occur to me that owning one might be difficult given that it was a limited production item with only 351 Lussos being manufactured during its production run from 1963 through 1964. I had staked my claim.

One of the first Lussos I looked at when my time came to buy one was a dark blue example owned by Haskell Wexler. Haskell had directed the film Medium Cool and would be the cinematographer on films like Who's Afraid of Virginia Woolf, the original Thomas Crown Affair and One Flew Over the Cuckoo's Nest among others. As much as I was eager to acquire a Lusso, I didn't buy Haskell's car. When I visited his home in the Hollywood Hills to see the car, I didn't even ask to test drive it. I wanted one that was in better shape.

I looked at a couple more Lussos which weren't that easy to find and I wanted one that was in 'like new' condition if possible. Finally, I found one that met my requirements. It was silver blue with French racing blue leather and carpets. The owner, who lived in Las Vegas, Nevada, agreed to drive the car to Los Angeles so that I could drive it and have it inspected by my mechanic.

We left Los Angeles just before rush hour traffic got underway and this would be my first long distance drive in a Ferrari. The weather was cool and the engine sounded magnificent with the windows down. We by-passed a long section of the San Bernardino Freeway in favor of a tree-lined road that seemed to go on forever towards the I-5 and the sounds of the V12 engine echoed off those trees as I imagined they would along the Mulsanne straight at Le Mans. Compared to the E-Type, the Lusso seemed like a wild animal that had slipped its leash--it revved to seven thousand and the fenders stretched forward hunting every nuance of the pavement in a predatory manner very different from what I had been used to.

As we passed Victorville, it began to rain and by the time we reached Barstow, a heavy fog had moved in. It made not the slightest difference and the Lusso maintained a cruising speed at or near 100 m.p.h. the whole time. All I did was to turn on the fog lamps that are designed into either side of the Lusso's front grill. I felt as though a new world had opened for me.

At Baker, we stopped for gasoline and I let the seller take the wheel. As we climbed the incline leaving Baker, I saw 120 m.p.h. on the speedometer, which is so extraneous on a Ferrari that the designer Pininfarina saw fit to put it on the passenger side of the instrument array. It wasn't to dip blow that speed until we slowed to exit the freeway going towards McCarran Field and my flight home.

It was another two days before I took possession of the Lusso. I was still in high school (having missed a semester because of the accident) and it was not 'opportune' for me to miss any school time. Realizing that I was impatient to have the car and that I was not happy about waiting for the weekend to get it, my father offered to fly to Las Vegas and drive the car back home to me. I countered by suggesting that we fly up together but that didn't solve the problem of school.

The following day, I was hoping to find the Lusso waiting for me as I came out of school. It was not to be. Not wanting to waste a trip to Las Vegas, my father spent some casino time at the Sands (as he and I would do on our subsequent trips) and it was almost midnight before I heard the Lusso coming down the street and turning into our driveway. At that point, the Lusso was mine!

I've heard people refer to Ferraris (and other special automobiles) by saying, "It's just a car". Nothing could be further from the truth. The Lusso formed a way of life for me that opened the door to special people and adventures I never would have otherwise known. It was never a toy that was taken for granted and I don't think I ever parked the Lusso without turning back to admire it before walking away.

In retrospect, I would say that the Lusso became a lifestyle; one that I was very grateful to experience.
krasnavian is offline
Quote
post #2 of 4 Old 02-11-2014, 04:51 PM
Italian Lover
Owner

Thank you for sharing

Thanks for taking the time to write such an enjoyable to read story.

David.
16M Down Under is offline
Quote