Join Date: Aug 2011
Location: France
Ferrari Life Posts: 229
First Track Day  Le Mans Bugatti Circuit
Earlier this year, I received an invitation, out of the blue, to participate in a track day on the Bugatti Circuit at Le Mans, with the Maranello. For those who don't know the Bugatti circuit, it uses the straight in front of the pits and grandstand and the section under the Dunlop bridge from the 24 Hours circuit, and then a loop back, behind the pit area, for a total length of 4.1 kilometres.
The event was set for the end of May, but unfortunately, on the day, it was pouring with rain when we arrived, and it continued to rain all morning. Actually it rained most of May. There was a mixed bag of cars present, belonging to various people invited, and the company who organised the event was showing off the new Jaguar F type. Special mention for a Ford GT 40 and a race prepared AC Cobra. Both sounded wonderful as the exhaust noise echoed off the empty stands.
After the briefing those, who wanted, went out in the wet. My first time on a track in many decades, and so also the first time on a track with the Maranello. Difficult to think of a more appropriate baptism, than Le Mans in the wet. Great fun nevertheless. Unfortunately the Gopro malfunctioned so we have no video of the appalling conditions. !fact the event was just a memory until a link to the official souvenir photos arrived last week.
The official photographer was out in the rain and took some excellent shots. My hat is off to this gentleman. Some of the Maranello are attached below. My apologies in advance if I am breaking forum etiquette by not removing the text from the photos but I don't know how to do it!
Nigel 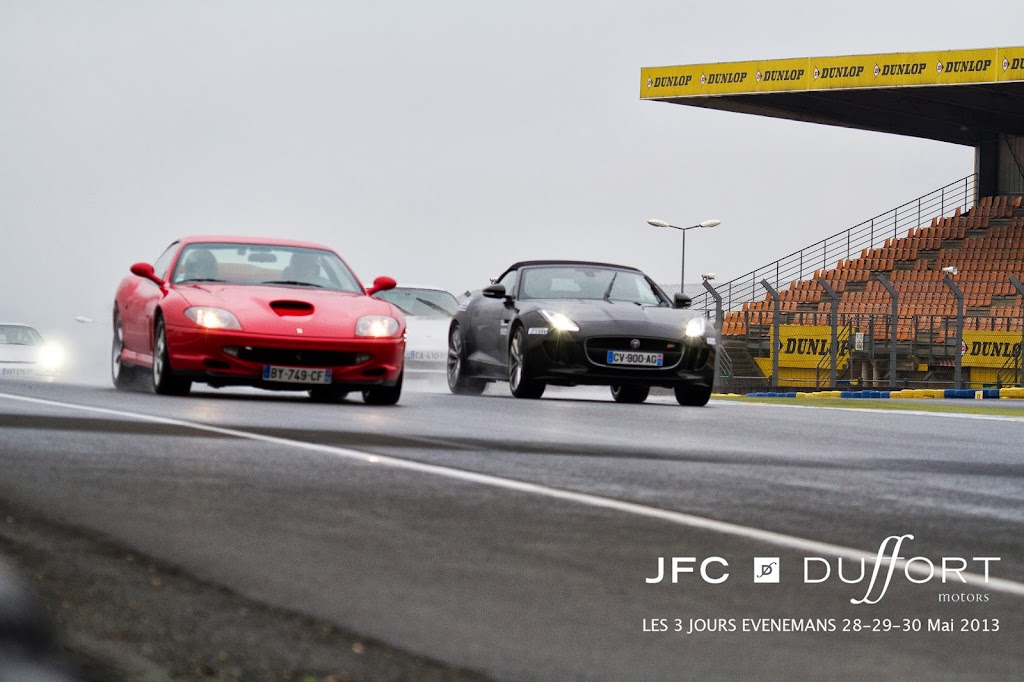 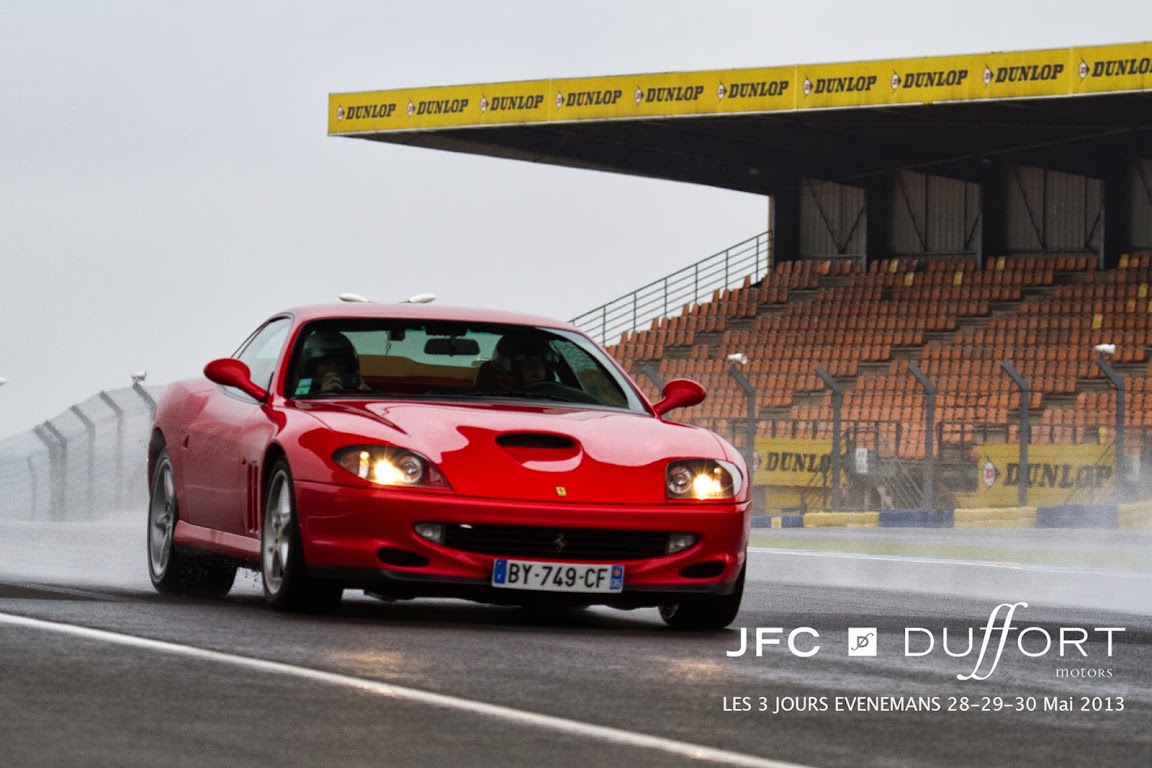 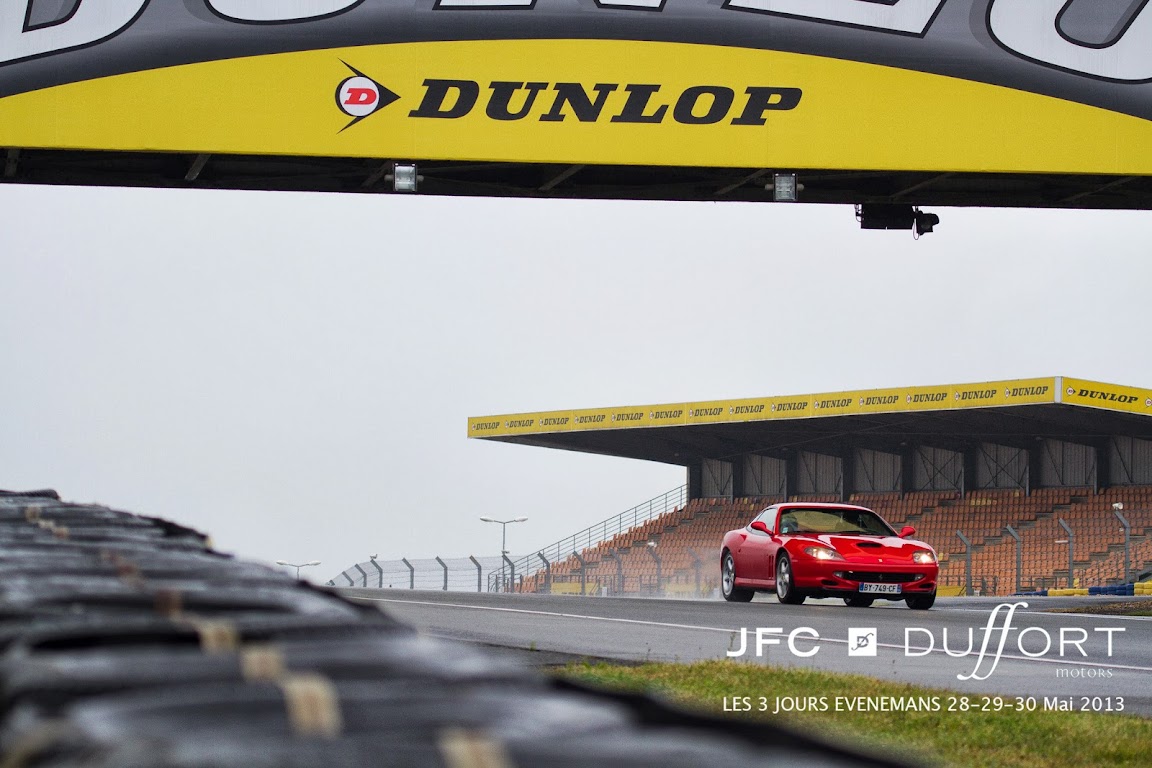 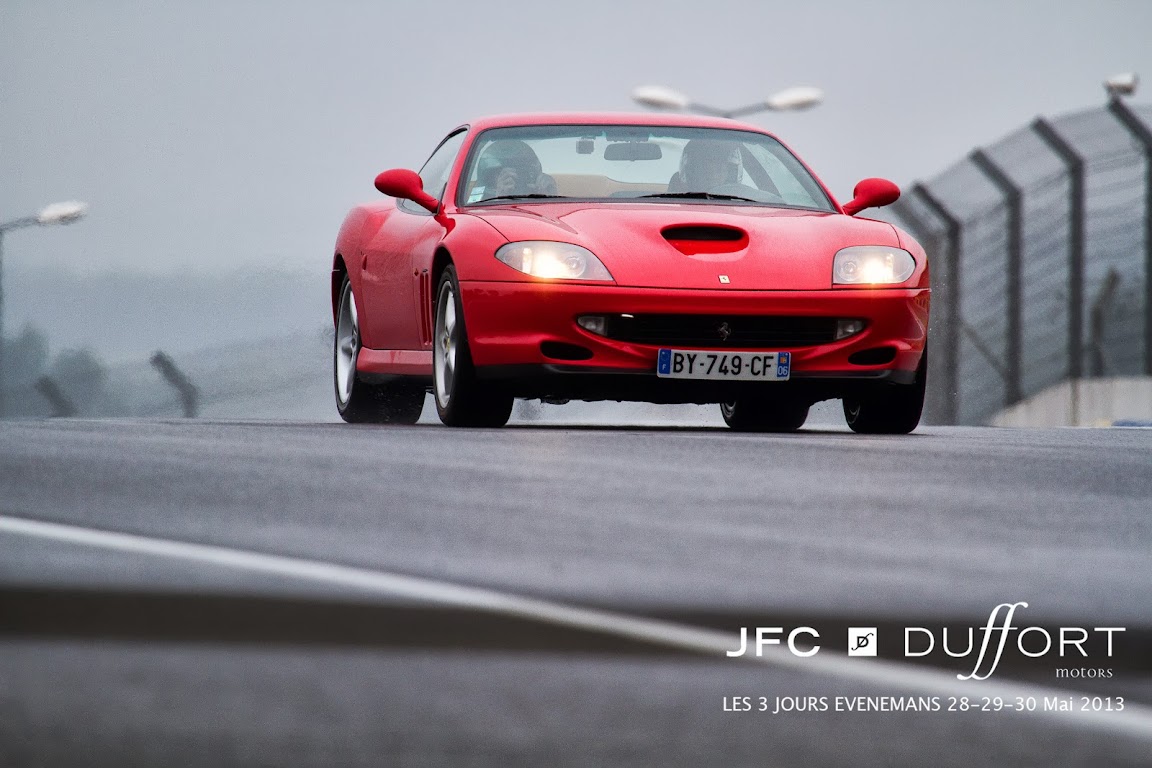 In my humble opinion, you should never remove copyright text from photo's, so I'm fine with the way they are presented here. Hopefully you will get some without markings for your own use in high resolution. The last one should be on your living room wall!!

Join Date: Aug 2011
Location: Albuquerque, NM
Ferrari Life Posts: 11,871
Nigel- No better car to drive around LeMans in the wet than a pretty Rosso Corsa 550. Were you blowing by the Jaguar in the one photo?
Taz
Terry Phillips

Join Date: Aug 2007
Location: Jersey
Ferrari Life Posts: 1,130
Great stuff Nigel! I had the pleasure of driving the Le Mans Bugattis circuit for many laps. In a mate's 996 GT3RS. A fantastic circuit! Such an evocative thrill to blast down the pit straight, lift briefly for the kink (while trying to keep the brain quiet that kept shouting "brake brake brake!") before the esses and onto the technical Bugatti circuit. Also enjoyed a passenger ride in a Lotus 340R. In the pouring rain.

It would be wonderful to take the bluebird there, I envy you enjoying the power and exquisite handling of your lovely 550 on this terrific circuit!
David

Join Date: Aug 2011
Location: France
Ferrari Life Posts: 229
Onno, I think some of the photos are great pieces of art, and not just the photos taken of the Maranello.
Taz, actually I was just holding him coming out of the previous bend which is part of the Ford Chicane on the main track. In the end I let him go as the car was a demonstrator and I think on rain tyres. The demo drivers were just out to give people thrills. I was on 75% worn Bridgestone Potenzas which I am trying to wear out to replace with Michelin Pilot Sports, but it seems to rain to much! On paper the performance of the two car are similar low down. With an 8 speed gearbox the Jag must spend more time between gears than actually in a gear. Interesting that the Ferari is 16 years old and the Jag is their latest offering.
David, the adverse camber in the Esses takes some getting used to and I followed a number of people with the rear ends sliding in all directions. One of the demo drivers actually put one of the three Jags into the gravel at this point, something I did not want to risk with the Maranello.
In fact the more I drive the Maranello under different conditions, the more I am impressed by the car. 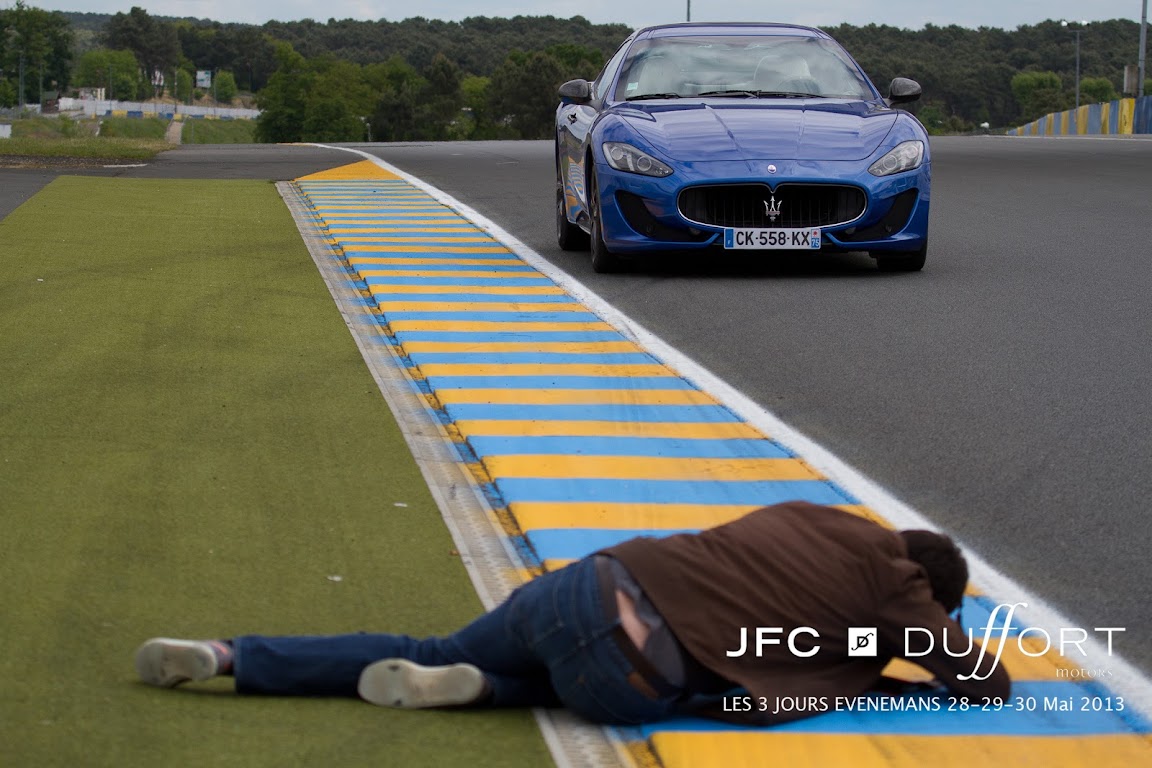 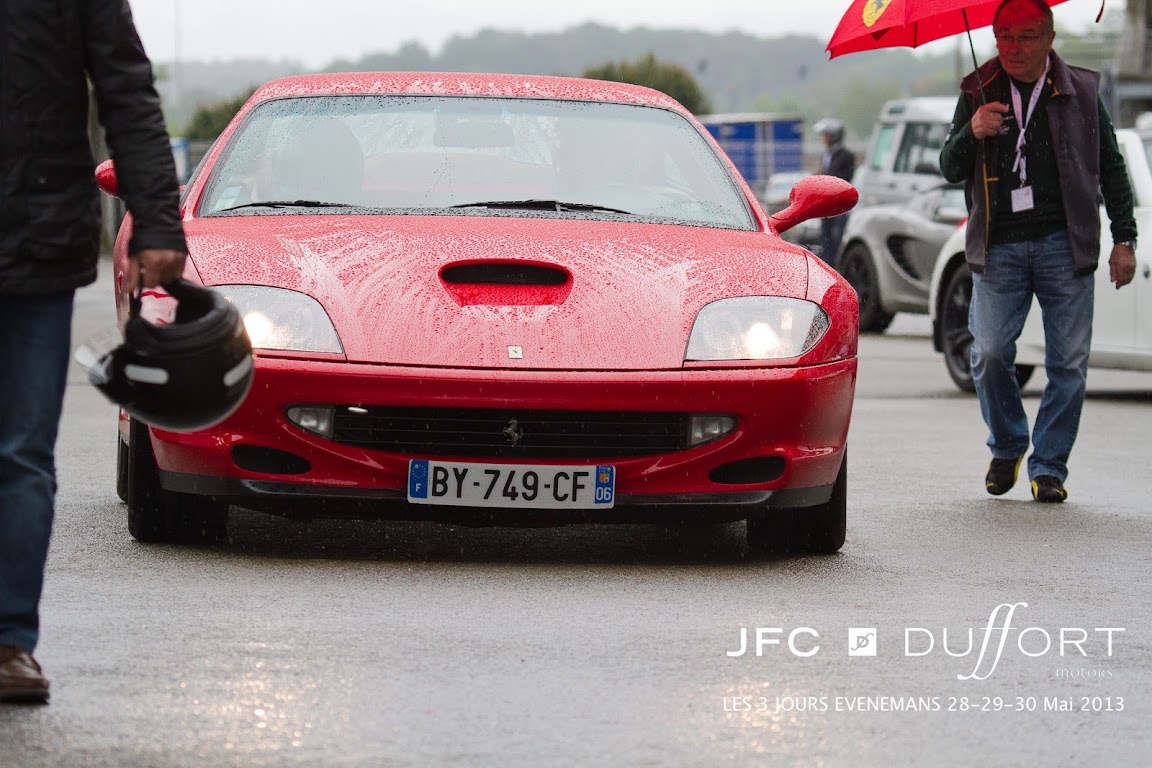